Call it Venezuelan Beach Food, Nikkea Cuisine or a Spanish Trattoria…It’s All Latin to Me
A Food Tour of Norwalk’s Latin Inspired Restaurants

It’s a beautiful thing when cultures cross paths and even more fabulous when these paths involve culinary traditions, ingredients and cooking techniques. Dishes become more heightened when ethnicities dance together on a plate.

“My grandfather owned restaurants in Malaga Spain, “says Ecuadorian born Wilson Rodriguez, the owner of Café Madrid, “Believe it or not, he was known for his pizza, which was a more bold and spicy version of what one might consider traditional pizza to be. He infused his native Latin flavors into everyone’s favorite food.” 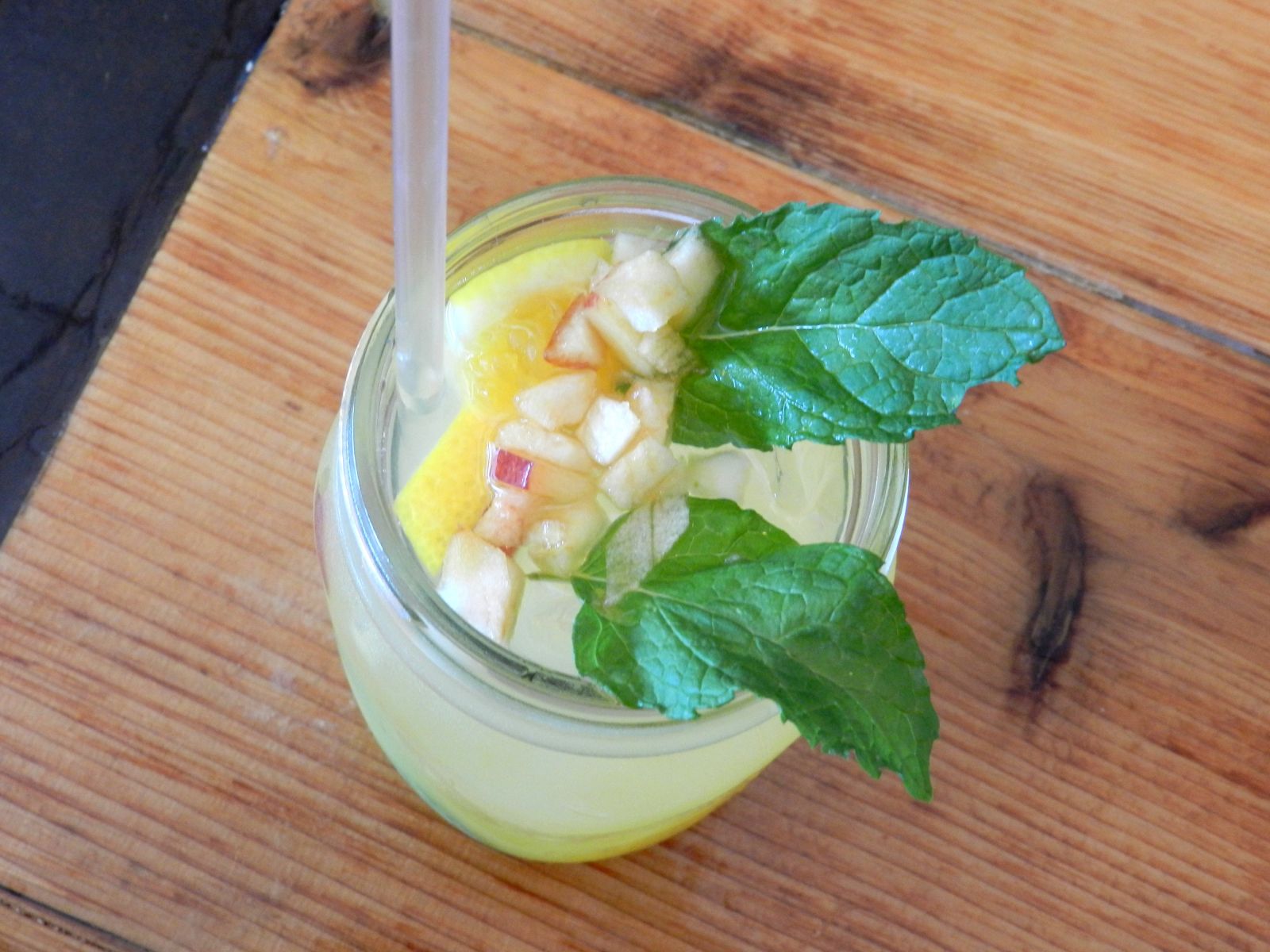 Wilson and his brothers Jose and Marcello came to the states in 1989 from Ecuador. They immersed themselves in the Fairfield County dining scene and in 1998 created their own Mediterranean / Latin inspired restaurant, Costa Brava, a fine dining restaurant which featured a land and sea menu with hints of Jose’s culinary studies throughout Italy. In 2013 Costa Brava morphed into a more casual restaurant and bar. Off came the white table linens and $30 entrees. In its place is a vibrant menu filled with a variety of tapas and entrées, and a large bar where fruity and fanciful joins forces with our good friend Don Julio. The extensive wine list remains, boasting an impressive collection of robust and fruit forward Albarino, Tempranillo and Garnacha grape varietals.

The open space, framed in large windows, eclectic artwork and adobe shelving filled with stunning pottery and collectibles from around the world, has a fabulous energy about it on any given night when the neighborhood ascends upon this sociable restaurant. Pitchers of Café Madrid’s popular and potent sangrias, margaritas and Proseco splashed citrus punch drinks don the tables, as does a plethora of Chef Jose’s fresh and flavor dishes which can be seen being passed across tables of friends and family who have come together over good food and drink. 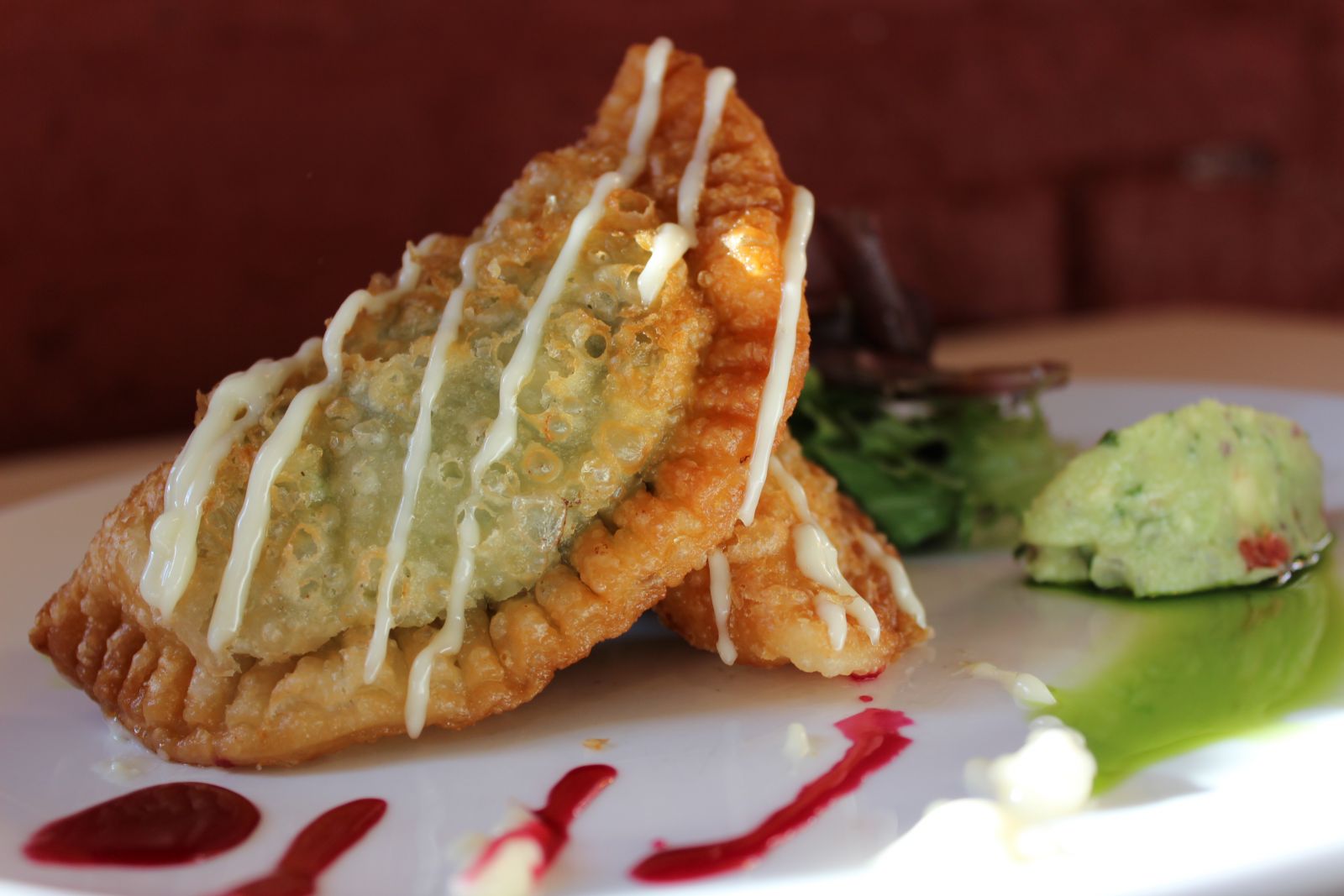 Standout dishes include; fried calamari with chipotle mayo; crispy cod fish croquettes; citrus ceviche with tender octopus, calamari and shrimp; paella Valencia with shrimp, chicken, Spanish sausages, mussels, clams and squid, cooked in saffron rice; and the churrasco with grilled steak, lentil stew, patacones (fried plantains) and avocado, topped with a fried egg. Chef Jose’s Italian dishes continue to make an appearance on the menu and granddad’s pizzas can also be had. Of course a visit to Café Madrid is not complete without their over-the-top empanadas. These scrumptious mini pies start with handmade pastry dough and are filled with all sorts of tasty options such as beef, chicken, spinach and cheese, chorizo or spicy pork. They are deep fried, imparting a crunchy-flaky texture.

The Rodriguez Brothers have hit their stride in this neighborhood hot spot and will soon take their crazy good empanadas to Stamford in the form of Doña Tere, a fast casual eatery featuring tapas and carry out dishes. There’s more to come from these talented and charismatic guys. Stay tuned…
cafemadridcontinental.com
120 New Canaan Avenue

Food writers tend to want to label things. Their need to give food a category is almost counterintuitive, but it seems to aid them in finding the words to describe a cuisine by honing in on its home turf. One writer went so far as to use the word “Hispanoamérica” when hoping to convey the culinary unity among Spain, Brazil, Portugal, Columbia, Peru, Venezuela, Argentina and its Latin American neighbors. But this is food people. And its complicated lineage is far too intertwined to unravel. Let’s just say that global influences will continue to shape our food cultures and the use of “authentic” should be obliterated from every menu in the world.

“As a chef you are influenced by so many things. Mentors, formal and hands-on education, traveling, and most of all, experimentation, “says Chef David Soto, the force behind Norwalk’s newest and most innovative restaurant, Aji 10, “There are little to no boundaries when it comes creating dishes.”

Thankfully there aren’t any boundaries when it comes to food as we wouldn’t be treated to Chef Soto’s innovative “Nikkea Cuisine”, a cross cultural food marriage between Peru and Japan. Peru’s large Japanese population has had a major influence within both food cultures and this unity is illustrated throughout the Peruvian born Chef’s menu.

No stranger to fusion cuisine, Chef Soto began carving out his culinary niche during his tenure at Baang Café & Bar 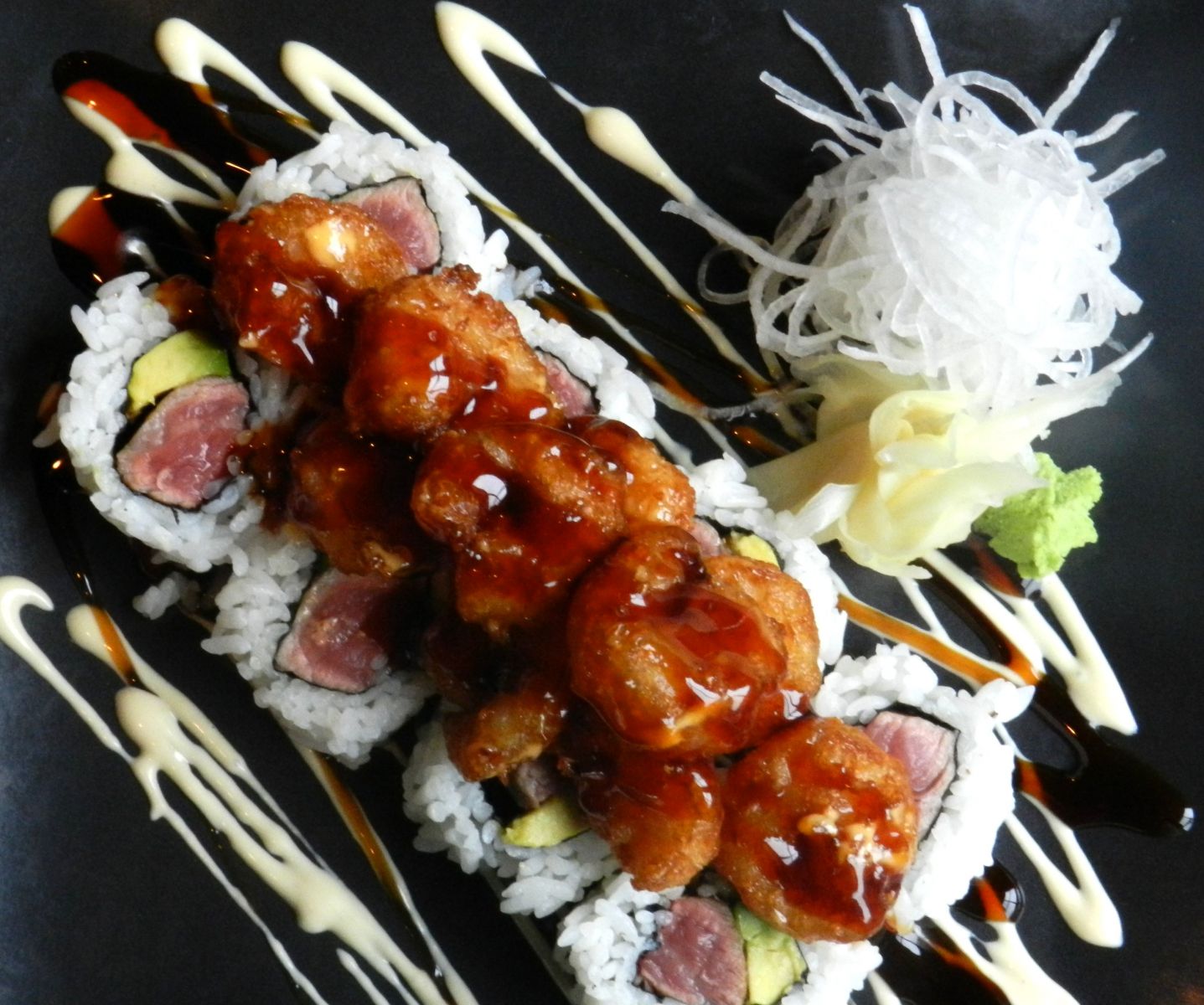 in Greenwich and Splash in Westport. Both restaurants fell under the De Caro Restaurant Group and were created by cb5 Hospitality, a high concept restaurant development team known for being daring and experimental. Stints at Cactus Rose in Wilton and Paloma in Stamford only furthered this chef’s Latin food portfolio, until ultimately opening his own restaurant in January of 2015 in the up and coming Wall Street neighborhood of Norwalk. Aji 10 is in the former Meigas location, a Latin restaurant powerhouse which occupied the space for nearly 15 years.

The Latin-Nikkea Cuisine philosophy is seen and tasted throughout the menu. Deeply rooted in both the Peruvian and Japanese seafood based cuisine, a large portion of Aji 10’s offerings are sushi-centric. Favorites include; Mar y Tierra Sushi Roll with quick seared New York strip on the inside and tempura fried shrimp on top, accentuated with chimichurri and house mustard sauce; and the Tico Rico Sushi Roll with fresh salmon, avocado, scallions and cream cheese topped with sweet plantain. More of these wonderful contrasting flavors and textures are seen in the Pizza de Atun Fresco, a pizzetta of grilled tandori bread topped with a layer of spicy mayo, sushi quality tuna, avocado, and pico de gallo; Tostada de Langosta made of tempura lobster mixed with Peruvian aioli and served on a fried tortilla; Ostras Fritas of tempura fried oysters, avocado salsa and Aji rocoto sauce served with mango salsa; and Tallarin Saltado, a Peruvian style lo mein with beef and vegetables.

Fans of Baang and Splash will be pleased to see the return of the crispy calamari salad tossed with frisse, radicchio, pickled jalapeno and miso vinaigrette. And carnivores will be thrilled with hearty dishes consisting of the Parrillada Argentina of grilled skirt steak, pork chop, chicken breast and chorizo served with fried yucca; and the Costillitas de Cordero a La Parrilla of grilled baby lamb chops topped with port wine mandarin sauce and served with potatoes gratin.

On the beverage side of things, there’s a large u-shaped bar manned with attentive and handsome bartenders shakin’ up creative cocktails and martinis. The wine list is extremely well thought out and includes numerous Spanish varietals and even their Fat Cat neighbor’s wine picks. Aji 10 provides an exceptional dining experience and is just what the Wall Street neighborhood needed to attract a broader audience.
aji10restaurant.com
10 Wall Street

Now we’ll take a trip to Valencia, situated on the southwestern coast of Spain – and in our world, located on Route 7 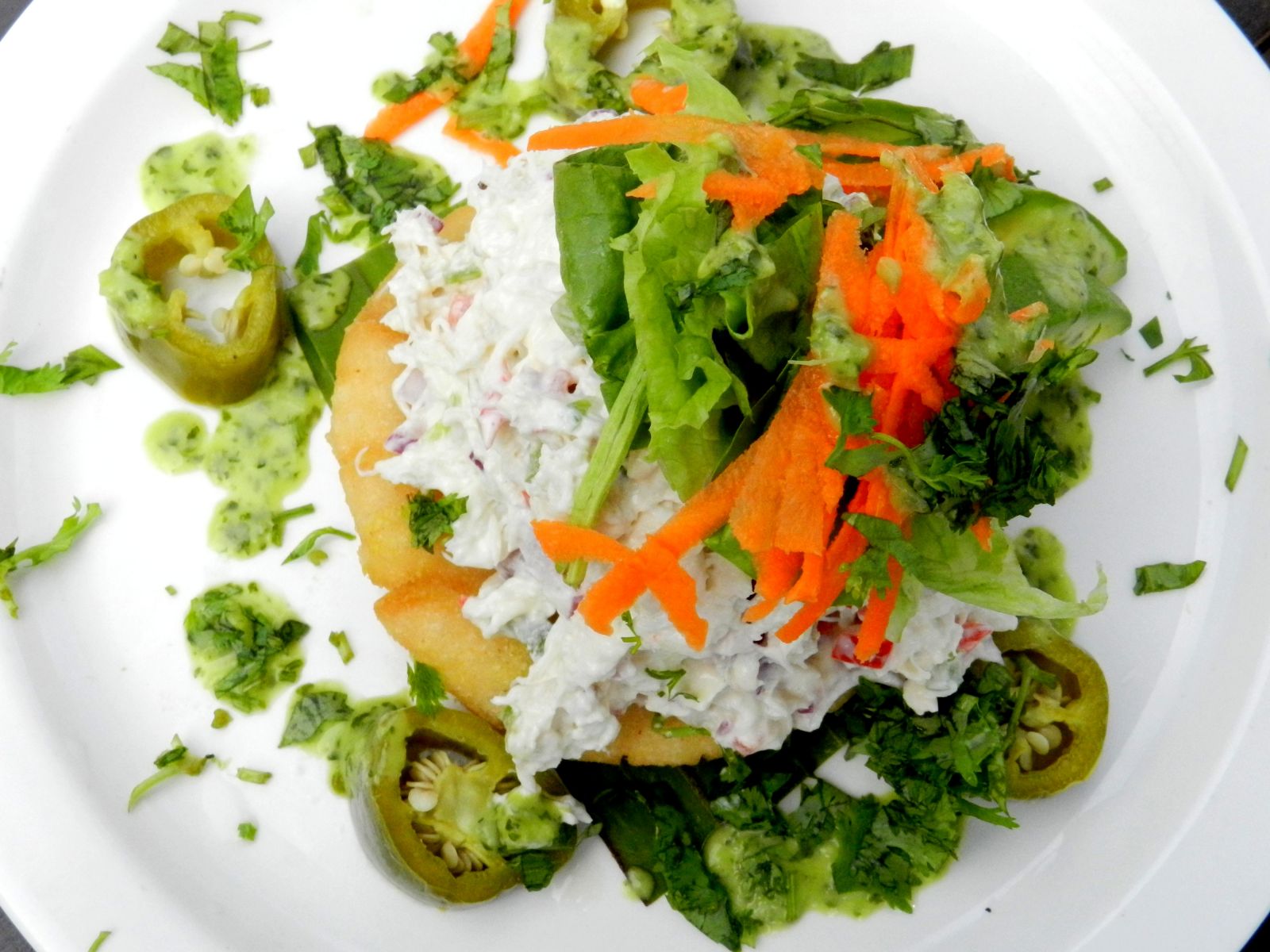 in Norwalk! Valencia Luncheria, the rebel child of our local culinary landscape, is the brainchild of Chef Michael Young, who many will know from Darien and Fairfield’s poplar Bodega Taco Bar. Chef Young was one of the earliest talents to carve out South Norwalk’s robust restaurant scene when he introduced no-nonsense Cuban food to uptight suburbanites back in 1999 while cooking at Mario Fontana’s Habana Restaurant. Upon returning from a road trip sabbatical throughout Latin America and Spain, this voracious chef returned to Fairfield County with a newfound passion for Latin coastal cuisine, Venezuelan street food and those damn good arepas.

Valencia Luncheria opened in 2003 in a tiny whole in the wall on Main Street. It was a three-meal-a-day, BYOB eatery with a few tables and chairs, a counter to order from and a kitchen the size of a NYC apartment galley. Arepas, a dense flatbread made from ground corn, were (and continue to be) filled with everything from egg, cheese and avocado for breakfast, to soy and ginger pork for dinner.  In 2011 Chef Young and his team moved into a free-standing building in the lot next door. A full scale dining room and bar, as well as a more heavy-duty kitchen was now in place, and Valencia Luncheria was ready to take on hungry food fans.

This is a restaurant for people who like to eat, drink and socialize. It’s not a see-and-be-seen place and any attitude is left in the car. The beauty of this restaurant is its ability to put forth quality food and drink and spot-on service without the pretense of what is perceived to be a more mainstream restaurant.  Décor is minimal and is really only comprised of large chalkboard and butcher paper menus posted throughout the space. Outside mismatched patio furniture sets atop soft beachy sand. A mixed crowd can be seen morning, noon and night; a testament to the restaurant’s ability to satisfy many tastes and wallets.

The beachy sand stems from the restaurant’s Venezuelan beach food concept. On the menu are burritos, empanadas and those killer arepas, but Chef Young uses these starchy pastries as a mere vessel for his sweet and savory combinations. Deep fried empanadas are stuffed with everything from chicken tamarillo and curried cauliflower and ricotta to Nutella and cream cheese and black bean and cheese. The open faced crab salad arepa and the “Real Deal” arepa with chorizo and mozzarella are really special – and those are just a few from the 30 or so varieties to choose from. His culinary prowess is alive and kicking in such dishes as: PEI Mussels with a coconut lime ginger broth; sweet chili-glazed scallop risotto; chocolate chili baby back ribs; and mango Dijon painted salmon. Ceviches and salads round out the menu,  and a new family style menu is now available which feeds 4 and includes such dishes as paella and that amazing Pernil (roasted pork) which comes to the table as a full pork shoulder.

While on your culinary vacation “on the beach”, one must imbibe with one (or more) of Valencia’s fun drinks. The Banh Mi is an ass-kicking concoction of jalapeno-infused vodka, lemon, mango, cucumber and cilantro. And the Zombie Blue made with dark and light rums, tropical juices, amaretto and blue curacao is great drink to get silly on with your friends over.

Valencia Luncheria continues to march to the beat of its own drummer, and its chef.
valencialuncheria.com
164 Main Street 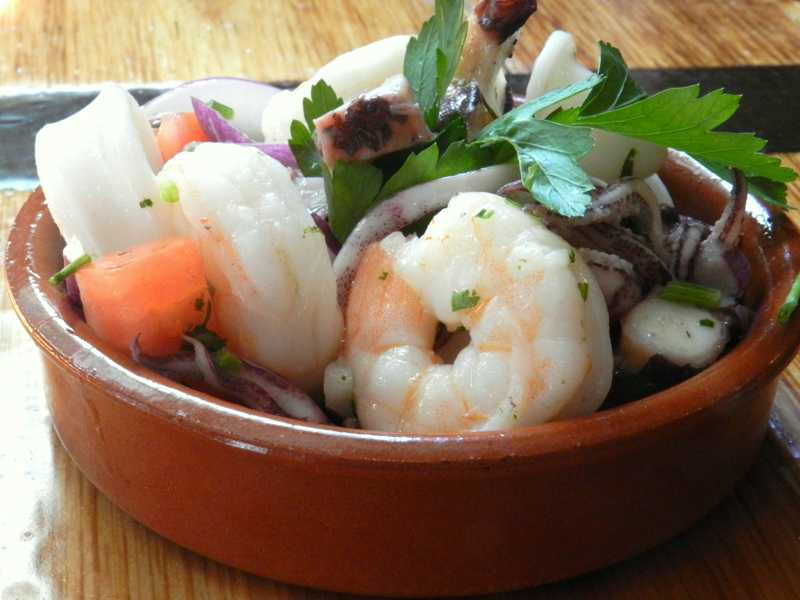