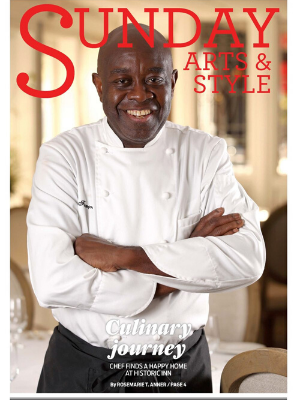 François Kwaku-Dongo never set foot in culinary school. His father, a nurse, never made pasta dough; his mother never pickled radish sprouts. Yet here he was, the new executive chef at the historic Roger Sherman Inn in New Canaan doing just that. His trajectory from his birth in the Cote d’Ivoire, Africa, to New York, Los Angeles, Chicago, Greenwich and New Canaan in the United States is a story of how determination, a desire to learn and a passion for life can lead down unexpected country roads to highways of opportunity and success.

The Roger Sherman Inn is a dream come true for Kwaku-Dongo.“I love the fact that it dates back to the 1700s,” he says, “and that it is named for an American patriot who was the only delegate to the Continental Congress to sign all four of the key documents of the American Revolution.”

When the inn was threatened by a developer in early 2017, town residents rallied to preserve it and won. And today they are the inn’s most stalwart patrons. The formal dining room with its white linens, brown walls and paintings of the Revolutionary War is a comfortable haven for polite conversation and enjoyment of Kwaku-Dongo’s ever-evolving menu.